Why Most Traders Fail

It’s no secret that the majority of people who attempt to trade securities for a living ultimately fail.

I’m not saying it’s impossible to trade for a living with a $10k or $20k account, but it might as well be. You’ll be relegated to placing inherently lower probability options trades, be forced to deal with higher commission rates, and take on more risk to achieve livable returns.

The first step towards trading for a living is having at least one year of living expenses saved in the bank, ample money for other expenditures, and a decent sized trading account.

With all of this said, being undercapitalized is not the main reason why most traders fail.

Most Traders Fail Because of Their Emotions

Once you have your capital in order, there is only one thing left to master – yourself.

In one of my favorite books, The 48 Laws of Power, by Robert Green, there are two distinct principles that, believe it or not, apply directly to traders: do not go past the mark you aimed for and be the master of your emotions.

After all, trading for a living means you have the power to give the middle finger to the 9-to-5 corporate BS that 99% of the population is forced to be a part of just to survive.

Trading is as powerful as it is rewarding, and if you want to do it as your sole means of income, understanding a few of the critical laws of power is essential.

In Victory, Learn When to Stop

This law of power is simple. You need to have a goal, a mark, and once you reach it, you need to stop. In terms of trading, if you’ve just bagged a huge winning trade or are up 200% for the year, take a break.

As a trader, the onus of knowing when to stop is entirely on you. Always have short-term and long-term goals and act accordingly when you reach them.

Wandering aimlessly in the markets with no clear goal and simply trying to eke out a few thousand dollars here and there is a recipe for disaster. The best traders are those who have a precise goal and will stop once they reach it.

The second law is more nuanced. It’s about emotions; something that all traders can relate to.

As Green explains, “emotions cloud reason, and if you cannot see the situation clearly, you cannot prepare for and respond to it with any degree of control. Anger is the most destructive of emotional responses, for it clouds your vision the most.”

This is spot on for trading. Losses are a part of the trading game. They’re going to happen. Most traders are simply not okay with this, and they let the embarrassment, devastation, and downright anger consume their judgment when they incur a large trading loss.

Don’t get angry with the market. Deal with it and move on.

If you dwell on your losses, you will brew destructive anger and your ability to think clearly and rationally for future trades will become impaired.

If you can’t control your emotions, you will not be a successful trader. It’s just that simple.

Trading for a living necessitates making decisions that most corporate jobs don’t. Make a few errors in a corporate job? No sweat, chances are one bad decision won’t cost you your job.

Make a few errors when trading for a living, however, and your livelihood could be over in a few days.

For traders that have a losing position, emotions are a huge hinderance.

“An emotional response to a situation is the single greatest barrier to power, a mistake that will cost you a lot more than any temporary satisfaction you might gain by expressing you rfeelings.”

If you let yourself get too excited when you turn a profit, your brain will inevitably learn to want and need this gratification over and over again. Although it might feel really good to celebrate a successful trade, the euphoria is going to make the unsuccessful trade feel that much worse, because remember, losing trades are part of the game…they will unequivocally happen.

If celebrate some successful trades a few times, it’s probably not going to affect your psyche.

But if you let your emotions take over, the highs and lows will gnaw away at your brain in the long-run… trust me.

Therefore, it’s best to leave all of your emotions out of trading. Think analytically and probabilistically; stay rational, not emotional. It’s easier said than done, but it’s completely essential to trade for a living.

A Trick: Change Your Surroundings

In theory, it’s easy to not be an emotional trader, but it’s much harder in practice.

One of the best tactics I’ve found to deal with the stress and emotions of large positions that keep my eyes glued to my screen for hours on end (like being short 30+ contracts of crude oil) is to surround myself by good people in beautiful locations around the world. It sounds kind of cheesy, but it really takes the grind out of trading. If I’m occupied with other activities, like watersports, I’ve found that I’m less emotionally involved in trading.

This is my current trading setup from a location somewhere in the tropics! 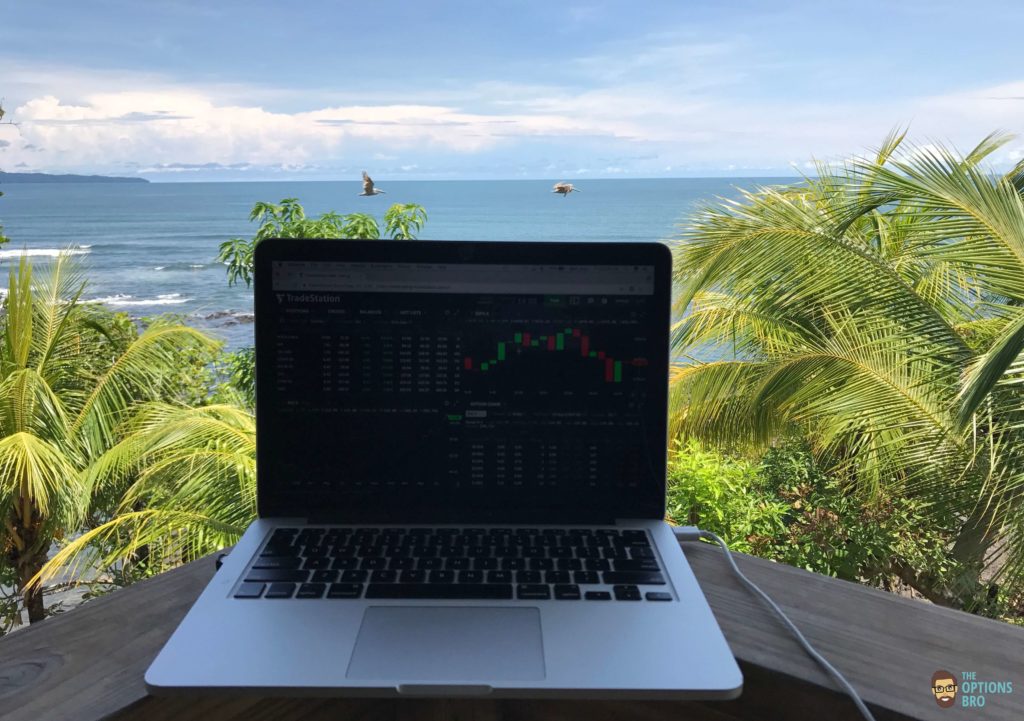 The true beauty of trading is that you can do it from anywhere! Even if you have multiple monitors, you can pack them with you in a large hard-shell suitcase, travel to interesting parts of the world, live in posh Airbnbs, and have drinks with new and awesome people.

Whatever you do, just make sure you don’t waste your life sitting in front of a screen in a room by yourself. This will unequivocally make you more susceptible to letting emotions cloud your reasoning.

There’s a beautiful world out there. And although trading is fun, it’s a means to an end.

I trade for a living because it provides me freedom. Within reason, I can go anywhere and do anything I want…whenever I want. That is power.

There’s no sense of trading in a dark room by yourself 24/7. Get out there and enjoy the world, and you just might find that trading for a living becomes less stressful and maybe even a little bit more plausible.