Billions TV Show: Who is Bobby Axelrod Based on?

Billions is one of the few TV shows that doesn’t suck and that focuses on an industry that’s often overlooked or botched by Hollywood – Wall Street. Billions focuses on the high-profile life of a billionaire hedge fund manager – Robert “Bobby” Axelrod. If you aren’t a diehard billions viewer, it’s safe to say you’re missing out.

Axelrod is featured numerous times throughout the show flying in helicopters, driving expensive cars, and of course, trading in his ultra-modern hedge fund surrounded by analysts wearing sweater vests. 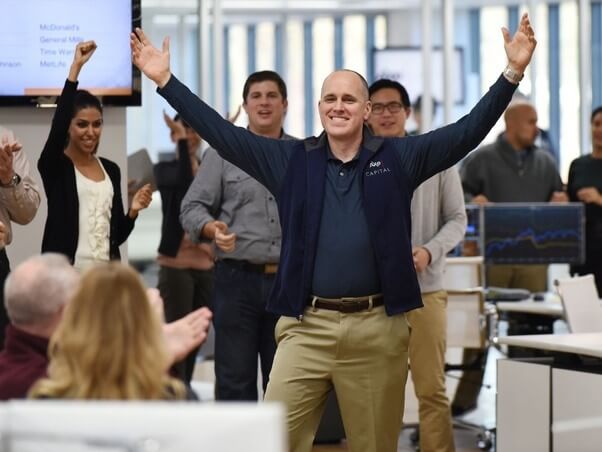 Since the first Episode of Season 1 aired in 2016, many viewers are still wondering if Bobby Axlerod is based on a real-life billionaire hedge fund manager. Let’s take a look.

Who is Bobby Axelrod based on?

Well, Billions co-creator Andrew Ross Sorkin hasn’t said if Bobby Axelrod is based off of any real-life hedge fund managers or traders, but there definitely seem to be some similarities between the fictional character and two Wall Street veterans.

If you’re a poker fan, you might recognize Bill Perkins from some of the poker tournaments he’s played in over the years.

He’s a natural gas trader and hedge fund manager who was one of John Arnold‘s key analysts and traders at Centaurus Advisors. John Arnold became one of the world’s youngest billionaires after he opened his hedge fund with nothing more than his multi-million dollar bonus check from Enron and a little bit of outside money. During 2002 to 2012, John, Bill, and the rest of the team at Centaurus managed to turn a few million dollars into several billion dollars, marking what is considered to be one of the greatest streaks in the history of trading.

In 2006, Centarus returned 317% alone. Now, it’s not clear how much of Centauru’s outsized gains were due to Bill’s trading activity. Bill cashed in big time from working at Centaurus and started his own hedge fund, Skylar Capital Management, with an estimated $700,000,000.

Regardless if the producers of Billions based part of Bobby Axelrod on Bill Perkins or not, the two seem to have similar choices in clothing and lifestyles: lowkey yet expensive clothing and highkey and expensive lifestyles. In other words, these billionaires aren’t wearing bespoke Brioni suits and Gucci loafers. They’re wearing Tom Ford hoodies and Tod’s sneakers.

Plus, judging by Perkin’s epic instagram page, where he is constantly flying on private jets and lodging at expensive hotels, the two hedge fund managers’ lifestyles aren’t all that different.

In terms of Bobby Axelrod’s troubles with the SEC and allegations of insider trading (which is basically Chuck Rhode’s entire motive to bring down Axelrod), there seem to be a lot of similarities between Axelrod and Steven Cohen.

In real life, Steven Cohen is a hedge fund billionaire, with one of the greatest investment records of all time, and with a similar net-worth to Axe. Also similar to Axe is Cohen’s notoriety for running a hedge fund that doesn’t play by the rules.

Cohen founded S.A.C. Capital Advisors with his bonus check from Gruntal & Co, a now defunct hedge fund where Cohen was making the firm over $100,000 a day with his uncanny trading abilities. 1992, armed with $25,000,000 of his own money, Cohen managed to grow S.A.C. Capital’s assets to over $12 billion dollars while deeply enriching himself in the process.

The SEC later brought a civil suit against Cohen, which was settled and the terms of the settlement mandated the conversion to a family office and prevented him from managing outside money until 2018 (Cohen is now accepting outside money). In addition, in November 2013, S.A.C. Capital Advisors pled guilty to insider trading and agreed to pay an aggregate fine of $1.2 billion. Sound familiar?

There are a lot of similarities between Cohen and Axe in terms of their insider trading allegations, but there are also a lot of differences. For one, Axe didn’t actually settle for the $1 billion fine when he had the chance.

The proposed settlement terms in Axe’s case involved a $1 billion settlement and the conversion of his hedge fund into a family office. Remarkably, this is exactly what Cohen did. S.A.C. Capital advisors turned into Point 72 Capital management and agreed to only manage Steven Cohen’s personal fortune; it could not accept money from outside investors.

However, in Billions, Axe tore up his $1 billion settlement check and stormed out of the room after Rhodes proposed a last minute “lifetime ban” from trading. Axe couldn’t agree to those terms, and this is a key difference between Axe and Cohen. Nevertheless, there are some striking similarities, and it seems a large part of Axe’s fictional legal problems were based off of Cohen’s actual ones.

Billions is a fantastic show that gives a pretty accurate glimpse into what life is like on Wall Street. Although Axelrod may not be fully based off of Cohen and Perkins, there are definitely a lot of similarities.

3 of the Best Options Trades in History

Bitcoin is Going Down, Should You Buy?