Shopify, (ticker symbol SHOP) an online company that provides e-commerce solutions for small to medium sized companies, as well as individuals, was down more than 10% today on news that approximately 400,000 of their registered users might have been lured in with shady, potentially illegal marketing practices.

Left noted in his report that Shopify is currently trading at a hefty multiple of 524x earnings. Relative to it’s other online e-commerce peers, this is a sizeable valuation for Shopify. However, this is not the fundamental problem with the company.

Upon visiting Shopify’s website blog section, one of the first images visitors see is a small call-to-action banner with a timer instructing visitors to reserve a seat in a seminar that explains “how to quickly start a profitable dropshipping store.” 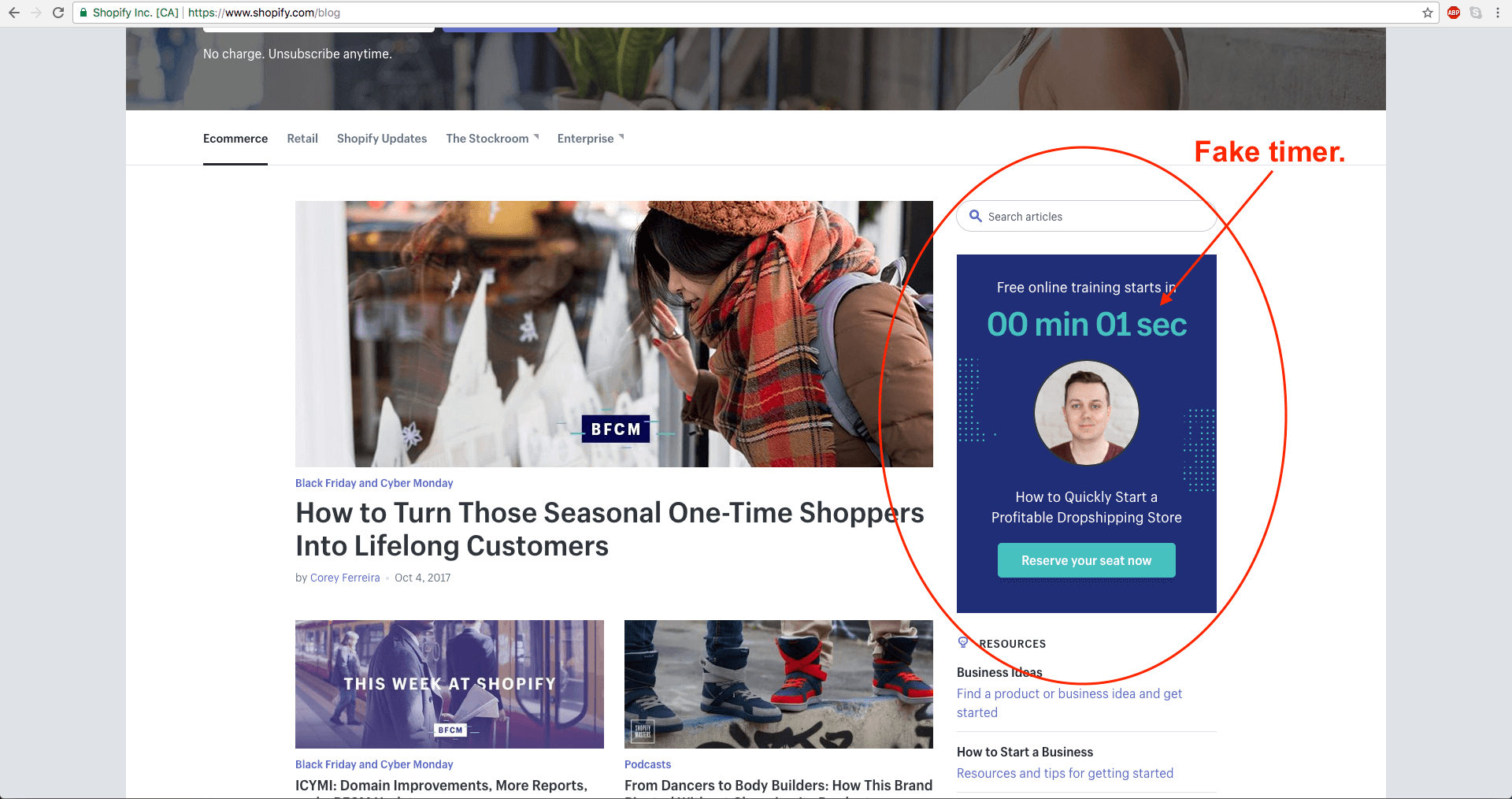 There are several strange things with this call-to-action banner. The first one is that the timer is fake, and that the “Free online training” doesn’t actually start when the timer runs out. It gives the impression that the user will miss the seminar if they do not reserve a seat, but in actuality, the seminar is not scheduled at any particular time.

Furthermore, the banner explicitly states that the seminar regards how to quickly start a profitable dropshipping store. It’s claims like this that seem to be somewhat deceiving.

For one, Shopify is telling potential customers that starting a dropshipping business will be quick as well as profitable.

This is up to the FTC (Federal Trade Commission) to decide. As it currently stands, it seems Shopify’s marketing practices are shady at best and illegal at worst. When the company’s market capitalization is taken into account, which is $11bn, employing fake timers and banners telling users dropshipping is quick and easy doesn’t seems bizarre.

However, Andre Left said Shopify’s advertising ventures go much further than this. Many of their “registered users” are affiliates posting content on Youtube and other social media platforms that states how regular individuals can become “millionaires” by signing up for Shopify.

A Look at Shopify Short Interest

Shopify has had a very impressive run so far in 2017. As the stock price has climbed, so has the short interest.

We can know a couple of things from the short interest of a stock. Since last updated short interest is only 4.24%, there is arguably much more room for short sellers to hop on the bandwagon; it’s also fairly inexpensive to borrow large quantities of Shopify stock to sell short.

Taking a look at who holds the most Shopify stock is quite interesting. Renaissance Technologies, one of the most profitable hedge funds in the world that is closed to outside money, has recently sold over 1,000,000 shares.

Bruce McKean, a very early investor in Shopify, has also downsized his holdings along with several insiders in the company. The largest holder in Shopify stock is Fidelity.

The simple answer is nobody knows what the future holds for Shopify. This report could mean absolutely nothing and the FTC may not launch an investigation. Many investors are strongly bullish on Shopify because of the growing e-commerce business as an industry. However, if the government decides that they violated any marketing rules, it could easily mean trouble for the company.

Just upon first glance, Shopify’s website certainly seems to employ marketing tactics that their competitors do not.

SOURCE: All data and screenshots in this post are copyright protected and compliments of Thomson Reuters Eikon. Not to be distributed.