How to Buy Kodak Stock – KODK

Kodak, officially known as Eastman Kodak Company, which trades under the ticker symbol KODAK, has nearly tripled in value since the Rochester, NY company announced plans to integrate blockchain technology and a digital token into the company’s existing photography business.

Founded over 130 years ago, Kodak is one of the oldest companies on the planet, and it’s somewhast shocking that they’re trying their hand at the cryptocurrency market. The company plans on unveiling KodakOne later this month.

Although many cryptocurrency pundits are claiming Kodak is just hopping on the crypto-bandwagon, what Kodak is attempting to do in the photography world sounds really interesting.

At the core level, they’re solving a problem that photographers have to deal with everyday; when other people use a photographer’s image and send them money to do so, that transaction is not instantaneous. Kodak aims to fix this problem with blockchain technology and their own digital token.

Investors evidently love this news, because Kodak stock nearly tripled only two days after the announcement.

Why is This a Big Deal?

For Kodak, this is a big deal because up until this moment, they were a largely irrelevant photography company that managed to barely survive 130+ years of business. Smartphones and Gopros have completely reshaped the digital photography game, leaving players like Kodak hanging out to dry.

The fact that Kodak is with the times and agile enough to delve into the world of blockchain and crypto is extremely good news for lots of investors and diehard crypto enthusiasts. KODK’s entry into the crypto market is demonstrable evidence of the beginning of widespread blockchain technology.

How to Buy Kodak Stock

If you’re looking to buy Kodak stock and have more of a correlation to the cryptocurrency movement, Ally Invest is the best online broker to do so.

For new accounts with qualifying deposits, trades are free for 90 days. After that, Ally only charges $3.95 per stock or ETF trade. It’s truly an unbeatable deal.

Step 1: Open and fund an account with Ally Invest

Step 2: Navigate to the “Trading” tab and enter “KODK” into the QUOTE box

Step 3: Make sure you select “Limit” order and select the price you wish to purchase Kodak stock at. Because Kodak is very volatile at the moment, market orders are not allowed and definitely not recommended. 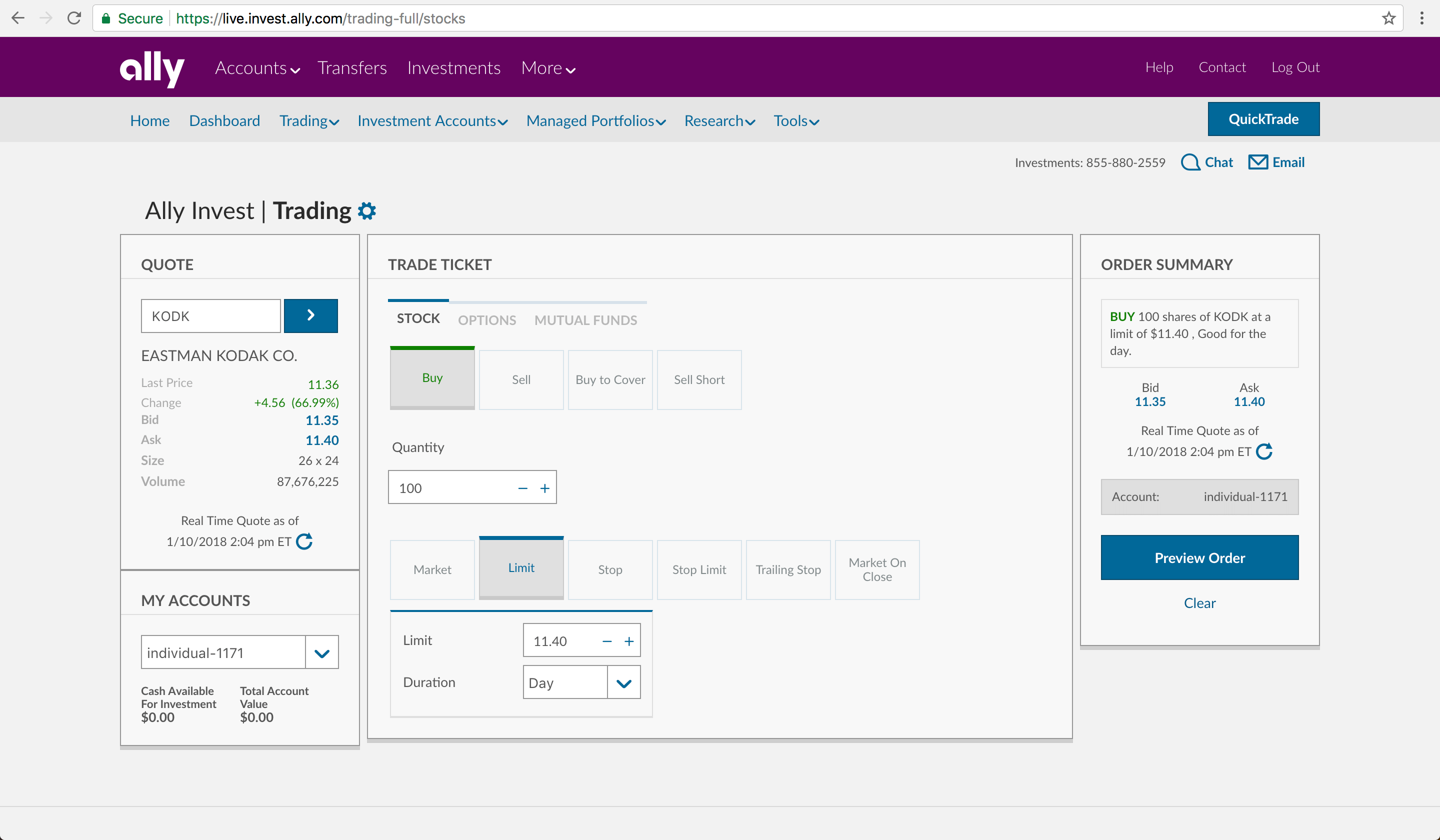 Other Bullish Factors in Kodak Stock

In 2017, the number of insider buys outweighed insider sells by a significant margin. Director George Karfunkel purchased almost 1,000,000 shares with a value of almost $9 million dollars. 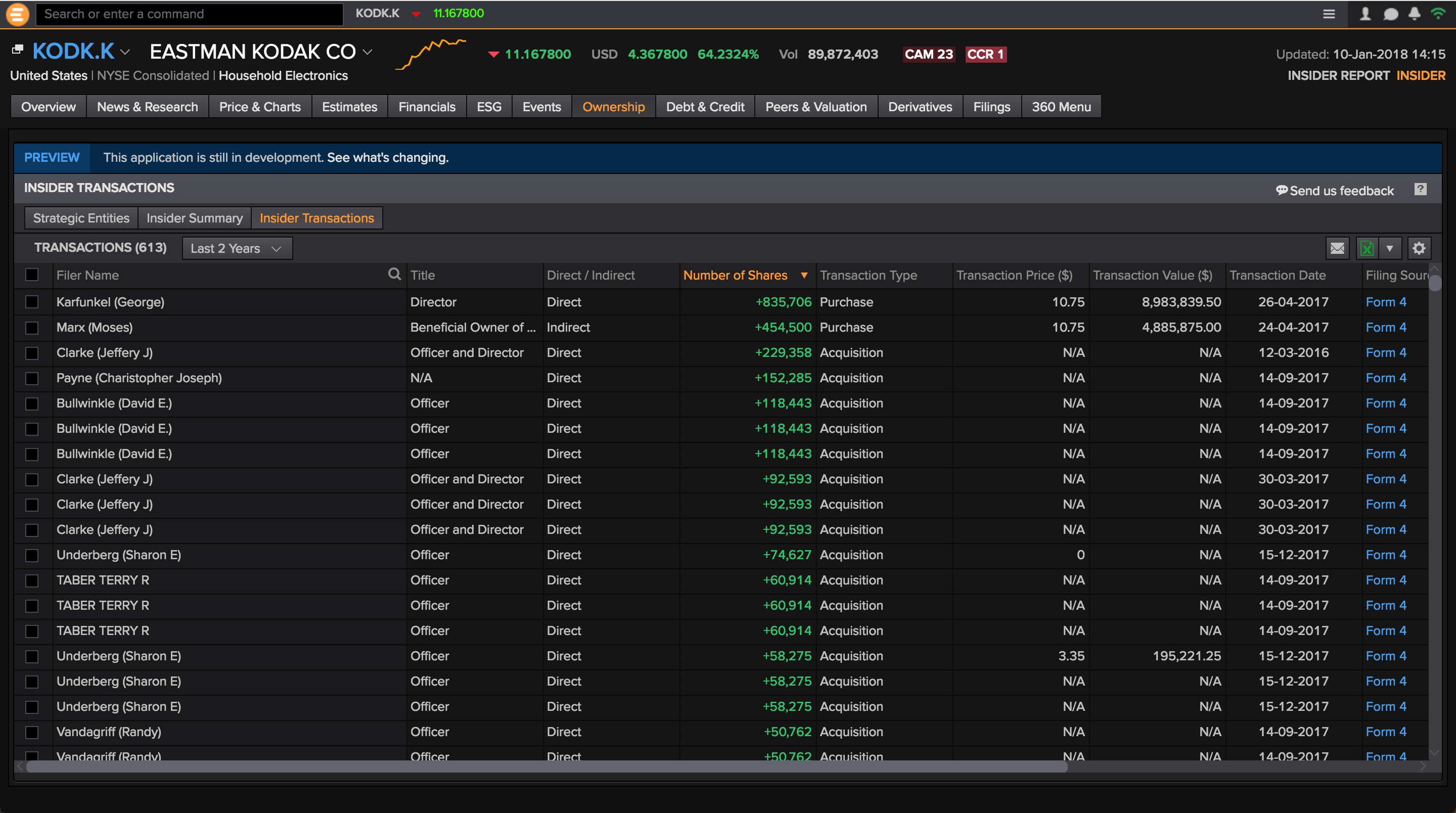 We love to see owners and employees of a company purchase their own stock. In our minds, it shows that they are committed to the company and in it for the long haul.

No one knows if this massive surge in Kodak’s stock price is just the beginning or a sign that we are in the biggest asset bubble known to man. If we look at the evidence, the former is more likely, especially when more and more companies start adopting blockchain technology.

Bottom line, Kodak is innovating. And history tells us that the companies who don’t slowly become irrelevant. If you are wondering how to buy Kodak stock, make sure you do your do diligence and use Ally Invest.