Bitcoin is Going Down, Should You Buy?

On reports of South Korea attempting to ban cryptocurrency trading for its citizens, bitcoin fell for a second day on Thursday, January 11th. XBT and BTC futures, the two sets of futures contracts traded on the Cboe and CME futures exchanges, respectively, also finished the day about 7% in the red.

The Justice Minister of South Korea, Park Sang-ki, announced that the proposed bill would ban all cryptocurrency trading on the countries exchanges. However, South Korea’s presidential office then stated that the crypto ban is no where near finalized and is by no means set in stone; this gave cryptocurrencies a nice boost off the lows of the day.

The History of Bitcoin’s Crashes Tell Everything

Out of all of the reasons in the world for bitcoin to plummet, the possibility of South Korea banning crypto trading is simply not a good enough reason.

Thinking that South Korea will singlehandedly cause cryptocurrencies to die is as ridiculous as thinking North Korea will destroy the entire United States with a nuclear missile. Both events are extremely unlike to happen, and even if it they occur, the effect will likely be minimal.

Does no one remember the bitcoin crash at the beginning of September, 2017? Bitcoin was enjoying a nice rally and was hovering near record-breaking levels of $5,000 when China decided to screw everything up with their “ban.” 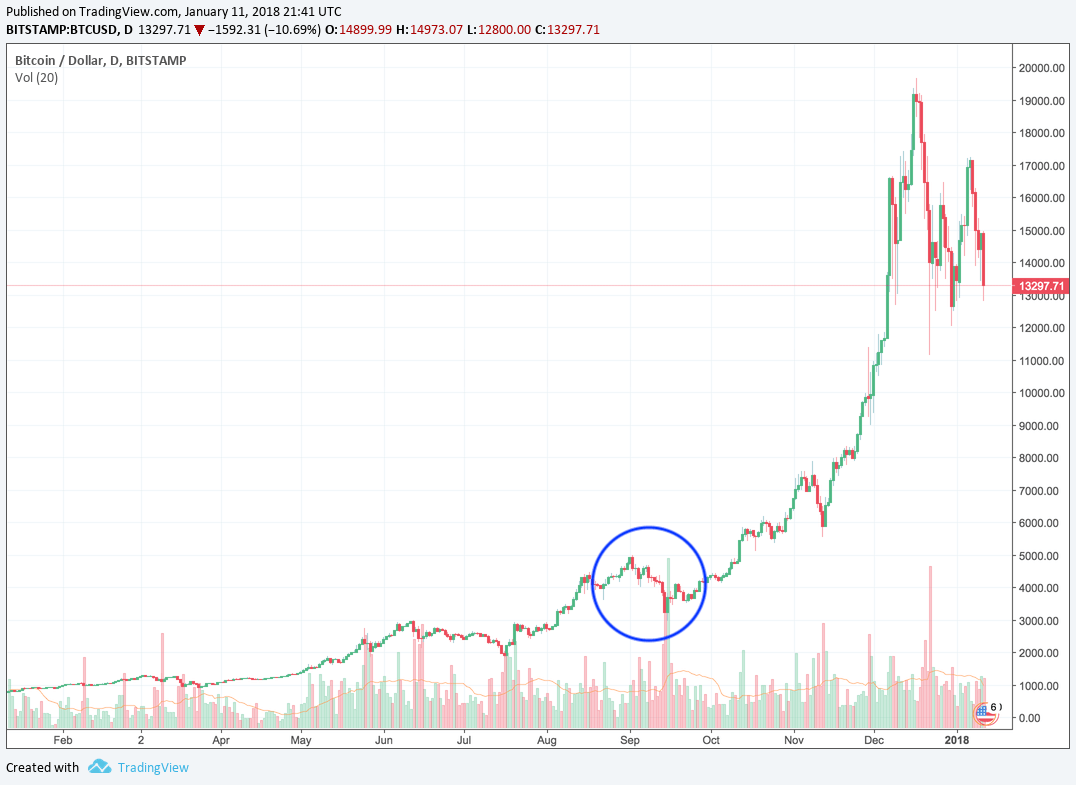 Although the crash that’s circled in blue may look insignificant, crypto traders who lived through the madness remember just how brutal it was.

Bitcoin cratered about 37% from it’s high of $4,950.72 on September 1st to the low $3,000 level by September 9th. The crash wiped out roughly $30 billion dollars off of the coin’s market capitalization and left many traders holding the bag.

Unlike the potential ban by South Korea, which could take years to come to life, when China announced their plans to ban crypto trading, they actually did it- props to them. Huobi was one of the top bitcoin trading platforms in China and was forced to stop operations.

So what happened after this “devastating” crypto ban in China? Crypto exchanges and participants evolved and migrated to different jurisdictions like Hong Kong and Singapore, and bitcoin went back into the stratosphere.

No one can say for certain if this is what will happen with the South Korean “ban” news, but there certainly seems to be a pattern of geopolitical news stories that cause bitcoin sell-offs and ultimately form the foundation for epic rallies further down the road.

As stated numerous times, we recommend buying and selling bitcoin via GBTC, which is currently the only bitcoin ETF instrument that aims to track the price of bitcoin.

Here’s why buying GBTC has its advantages for diehard cryptocurrency bulls. Had you bought GBTC when the China ban news came out, you would have netted 9 times your original investment, assuming you purchased GBTC near the lows of $500.

With actual bitcoin, even if you bought at the lows, you only would have made roughly 6 times your original investment. 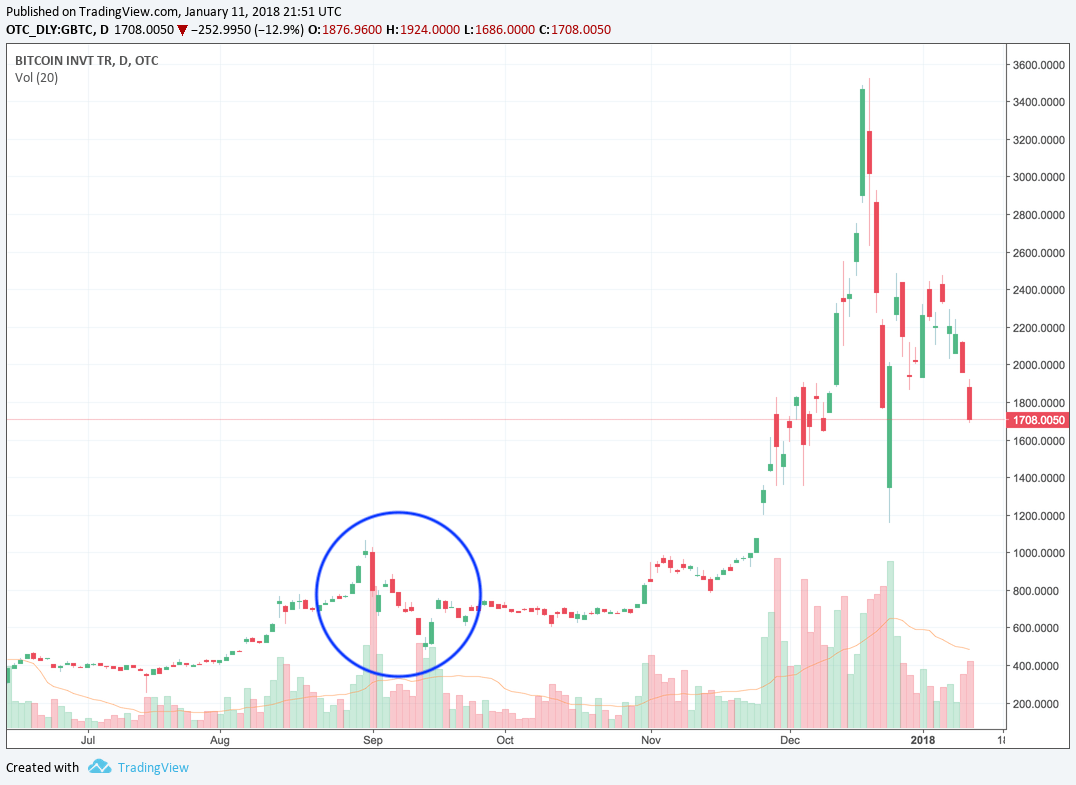 1 share of GBTC equates to about 0.1 bitcoins. Traders who buy GBTC with a regulated broker, like Ally Invest, don’t have to worry about making a digital wallet and having their account frozen or “suspended” by unregulated and possibly untrustworthy cryptocurrency exchanges. Plus, Ally is offering free trades for 90 days for qualifying minimum deposits. This means you don’t have to deal with Coinbase’s absurd fees!

Simply put, GBTC makes it easy to trade bitcoin, and that is why GBTC made 3x more from mid September to December than physical bitcoin. More and more investors are piling into the ETF due to the convince factor, and that pushes up the price beyond the net asset value which would have resulted in some hefty profits for longs.

It’s impossible to note that the past is not a guarantee of the future. Maybe South Korea attempting to ban bitcoin is in fact the end of cryptocurrencies as we know it.

However, having looked at all of the facts and similarities between the China’s actual crackdown (i.e. not just a rumor), and the effect it had on the price of bitcoin, it seems unlikely that the end of bitcoin and blockchain is near.

What Happens to Options That Expire In The Money?

Why Are Interactive Brokers Margin Rates so Low?

Selling Options for a Living – Is it Possible?