Why is Bitcoin Crashing Today?

Bitcoin has plummeted more than 28% in the past 5 days and just about every trader is wondering why the supposed all-star cryptocurrency is crashing. Let’s take a look at some of the factors that might be causing bitcoin to crash.

Investors are Panicking and Taking Profits

This is probably one of the most plausible explanations as to why bitcoin’s plunge has been so prolonged and exascerbated. As the price keeps falling, more and more investors are losing confidence and jumping ship.

As a result, this only pushes the price down even lower, thereby causing the cycle to continue. As with all market crashes, not just cryptocurrency, fear is the strongest emotion.

Imagine being Curtis Jackson, AKA 50 Cent (but not the same 50 Cent who buys hundreds of millions VIX call options for $0.50) and owning 700 bitcoins.

As the price of bitcoin keeps crashing, what are you going to do? Are you going to take your money and run, or are you going to hold on for dear life? There are hundreds (if not thousands) of other people just like 50 Cent who own hundreds of bitcoins all over the world. Waking up to discover bitcoin trading down 20% doesn’t exactly inspire confidence, and when investors see large losses, they are psychologically inclined to pull out and stop the bleeding – history has proven that this short-term mindset is foolish.

Another possible explanation as to why bitcoin is crashing might have to do with the news from South Korea. When South Korea announced a plan to possibly ban all cryptocurrency exchanges in their country, bitcoin took a serious nose dive: it never fully recovered. Although the crypto ban was later confirmed as “not going to happen” by the South Korean government, bitcoin still took a beating. 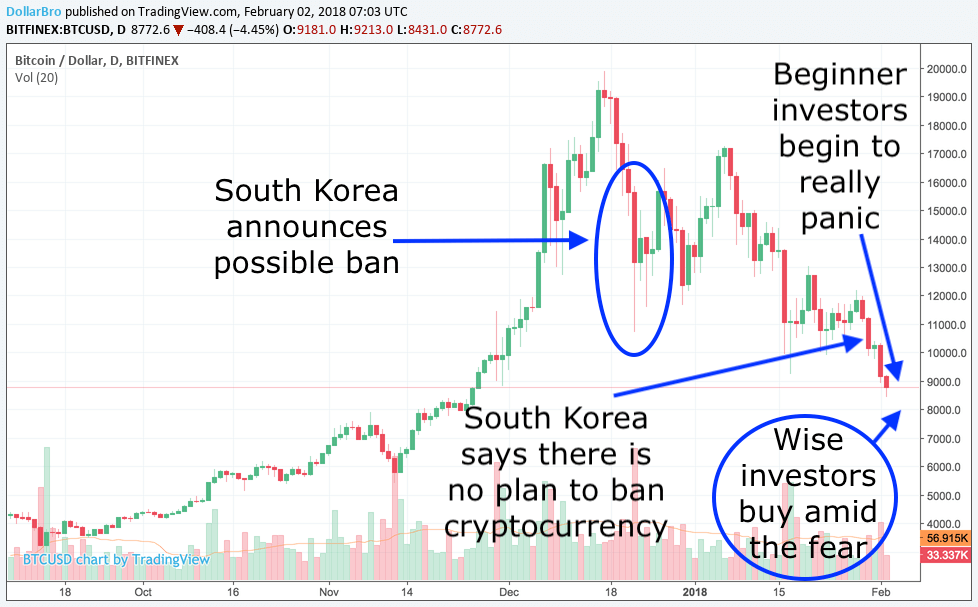 Perhaps this news, and the subsequent sell-off, was enough to unnerve some bitcoin investors. Given that the sell-off was caused by a rumor of banning cryptocurrency, and then this rumor was later proven to be false, it seems bizarre that bitcoin is trading lower than it was before the rumor.

The old investing mantra you’ve probably heard a thousand times is just as true today as it was 50 years ago.

This could not be more accurate for today’s current bitcoin situation. Investors are panicking and trying to unload their bitcoins, without a valid reason other than that the price is inexplicably falling. Since investors are panicking, there is defiantly a profit opportunity admits the chaos and panic.

“Buying the dip” (buying when prices decline) is probably the hardest thing to do in the entire world. It seems so illogical. Why would you want to buy something that is going down in price?

Well, eventually, bitcoin will rebound. Blockchain technology has not disappeared, nations have not announced bans, and the supply of bitcoin has not increased. The only thing that has changed is people’s perception of bitcoin based on the current market price.

Buying Bitcoin via GBTC After the Split

We do not currently own any bitcoin, but we may buy some by buying GBTC.

The reverse split in GBTC did not affect its value, as reverse splits never do this. 10 shares at $100 a share is the same as 100 shares at $1 a share. This is basically what the managers of GBTC did. They increased the number of shares and lowered the price on a 90-to-1 ratio.

This is good news for investors who like to trade stocks in blocks of 100 or 1,000. Before, it was very difficult to buy GBTC because of how expensive it was; often times we could only buy 4 or 5 shares at a time.

We’ve written several articles on this now, and it always amazes us how investors still overpay for their stock trades with Fidelity, Schwab, and the other mainstream brokerage rip-offs.

Although it may not seem like it right now, bitcoin will almost certainly rebound at some point. Nothing has fundamentally changed in terms of the thesis to own bitcoin, and until that changes, crashes like this are excellent opportunities to purchase bitcoin at a discount for investors who know what they’re doing.